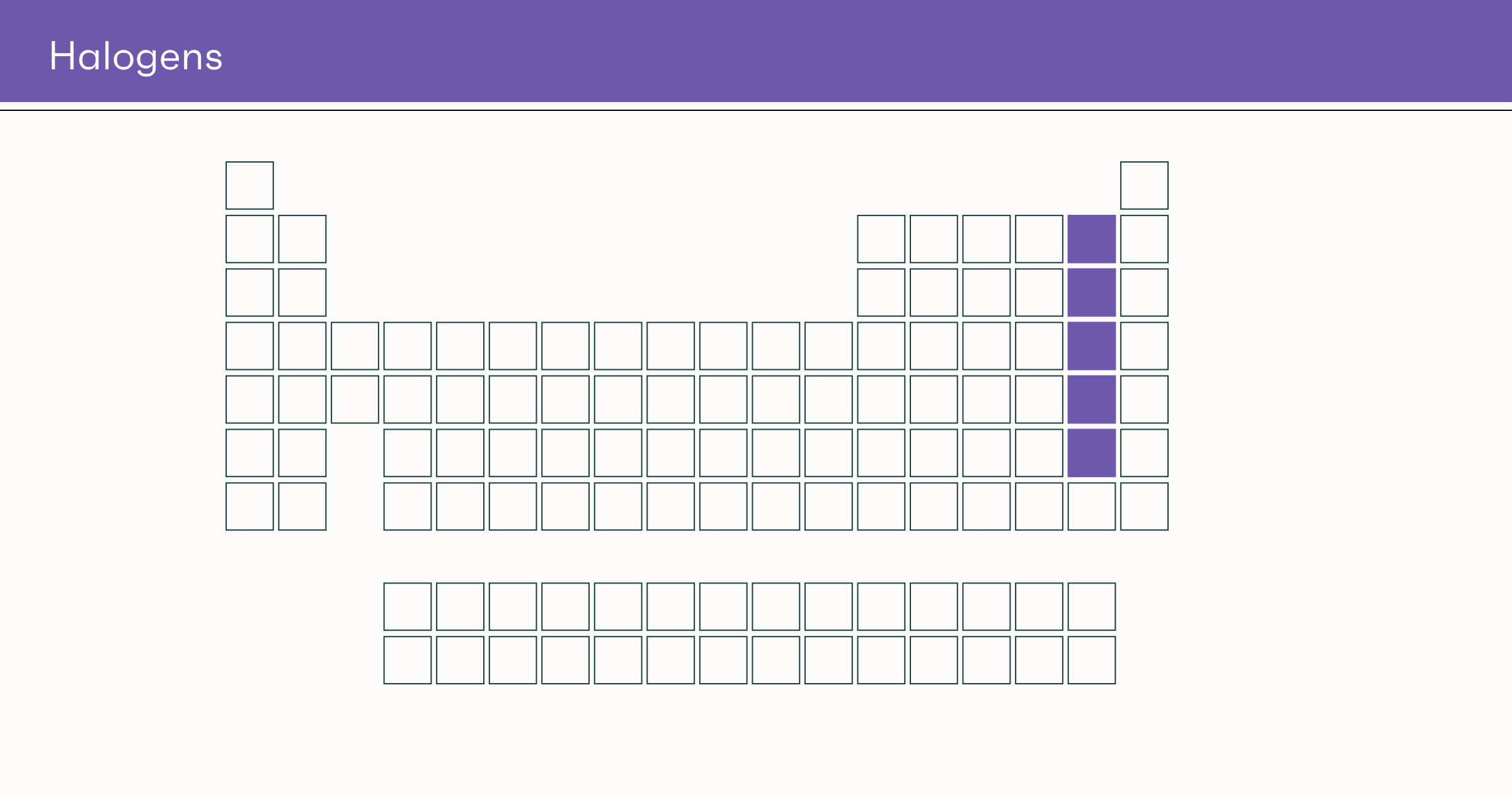 The halogens are located in group 17 (formally known as group VIIA) on the left of the noble gases on the periodic table. These five toxic, non-metallic elements make up group 17 and consist of: fluorine (F), chlorine (Cl), bromine (Br), iodine (I) and astatine (As).

The halogens have seven valence electrons and thus they only require one additional electron to form full octet. This characteristic makes them more reactive than other non-metal group. Astatine is radioactive and has short-lived isotopes but it behaves similar as the other members of the group. The group of halogens is the only periodic group that contains elements in three of the main states of matter at standard temperature and pressure. Fluorine and chlorine are gases, bromine is liquid and iodine and astatine are solid. Halogens form diatomic molecules such as F2, Cl2, Br2 or I2 in their elemental states. The bonds in these diatomic molecules are non-polar covalent single bonds.

The chemical behavior of halogen elements depend on the electronic configuration in the valence shell. The halogen atoms carry seven valence electrons in their outermost electron shell. These seven outermost electrons are in two different kinds of orbital, designated s (with 2 electrons) and p (with 5 electrons). The general electronic configuration of outermost shell of halogens is ns2np5. Potentially, a halogen atom could hold one more electron (in p orbital), which would give the resulting halide ion the same configuration as that of the noble gas next to it in the periodic table. These electronic configurations are extremely stable. This pronounced tendency of the halogens to accept electron renders them strong oxidizers. That is why halogens form ionic compounds with alkali metals and earth-alkaline metals. Electonegativity, ionization energy, electron affinity and reactivity decrease down the group. All halogens possess the oxidation state 0 in their diatomic elemental forms. Fluorine exhibits the oxidation state -1 (fluoride F- ion). The principle oxidation states of chlorine, bromine and iodine are -1, +1, +3, +5, +7. In addition, halogens act as oxidizing agents / they exhibit the property to oxidize metals. Therefore, most of the chemical reactions that involve the halogen elements are oxidation-reduction reaction in aqueous solution. The halogens often form the single bond with carbon and nitrogen in organic compounds. The melting and boiling points increase down the group because of the Van der Waals forces as well as the size of the molecules. The reactivity of the halogens decreases down the group (At ˂ I ˂ Br ˂ Cl ˂ F). This is due to the fact that atomic radius increases in size with an increase electronic level energy. This lessens the attraction for valence electrons of other atoms, decreasing reactivity. This decrease also occurs because electronegativity decreases down a group and there is less electron ˝pulling˝. In addition there is a decrease in oxidizing ability down the group.

Chlorine is the best known of the halogen elements. The free element Cl2 is widely used as a water purification agent and it is employed in a number of chemical prosses. It is used to disinfect drinking water and swimming pools. Sodium hypochlorite (NaOCl) is the main component of bleach. Hydrochloric acid (HCl) is a commonly used acid in industry and laboratories. Chlorine is also present in polyvinyl chloride (PVC) and several other polymers. Chlorine is very useful in pharmaceutical industry and in medicine. It is important component in pesticide production. Sodium chloride or table salt (NaCl) is very important salt for animal and human normal functioning. Fluorides are known chiefly for their addition to public water supplies to prevent tooth decay, but organic fluorides are also used as refrigerants and lubricants. Iodine is most familiar as an antiseptic, and bromine is used chiefly to prepare bromine compounds that are used in flame retardants and as general pesticides. Iodine is important in the proper functioning of the thyroid gland of the body. Because of that table salt now contains iodine to help proper functioning of the thyroid hormones.