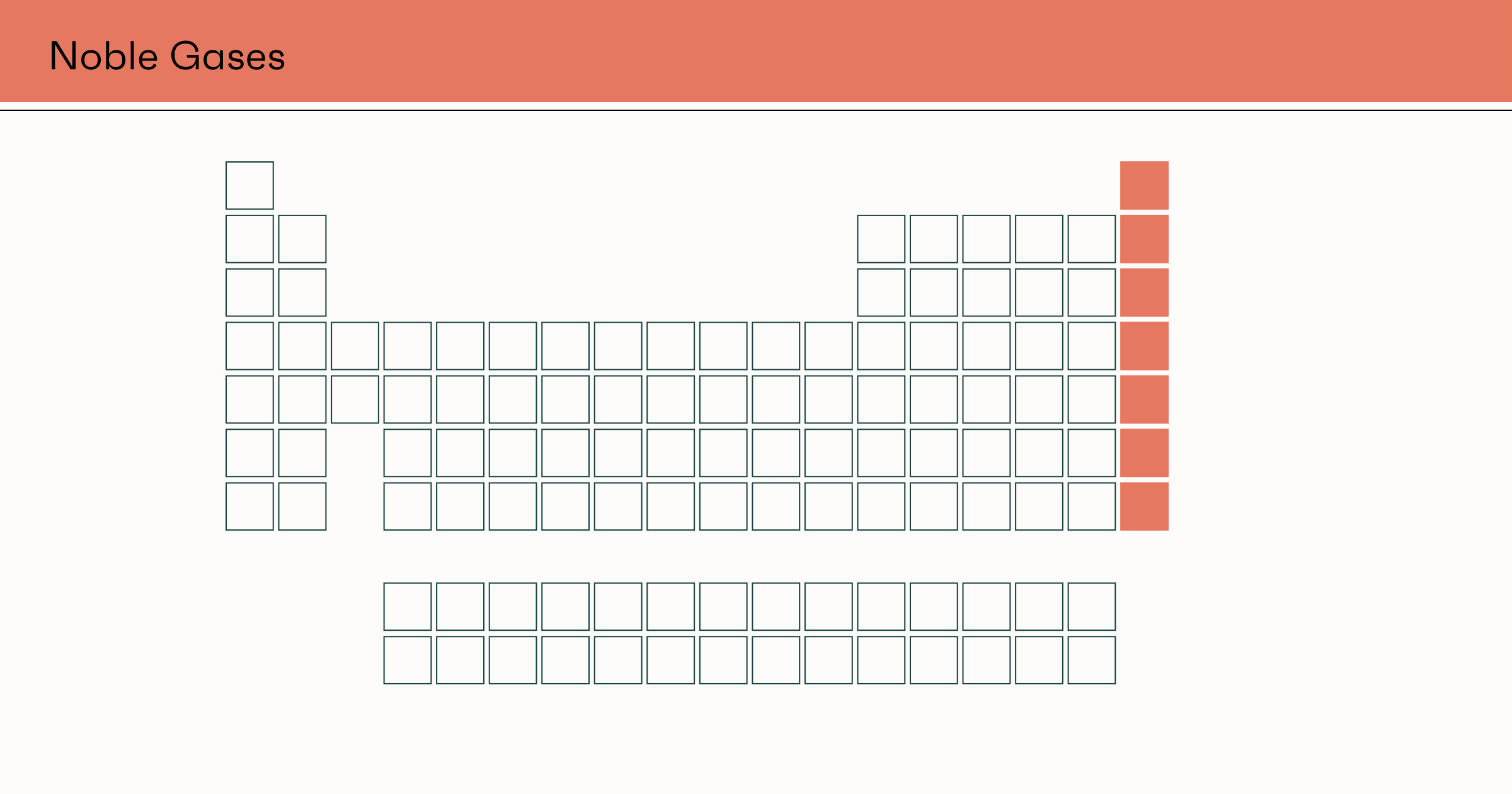 The six noble gases that occur naturally are helium (He), neon (Ne), argon (Ar), krypton (Kr), xenon (Xe) and the radioactive radon (Rn) and they are all monoatomic gases with very law chemical activity. Oganesson was produced in laboratory and it may not be found in nature. The noble gases are exactly the members of group 18 for the first six periods of the periodic table. When the members of the group was discovered and identified, they were thought to be extremely rare and chemically inert. Because of that these elements were called the rare or inert gases. But today we know much more about these gases. Some of them are quite abundant on Earth and in the rest of Universe.

Each noble gas element is situated in the periodic table between an element of the most electronegative group, the halogens element (group 17, the atoms of which add electrons to achieve the octet and become negative ions), and an element of the most electropositive group, the alkali metals (group 1, the atoms of which lose electrons to become positive ions). The noble gases have full valence electron shells. Valence electrons are the outermost electrons of an atom and are normally the only electrons that participate in chemical bonding. Helium has stable electronic configuration with stable duplet in valence shell and the other noble gases have stable electronic configuration with stable octet in valence shell. Atoms with full valence electron shells are extremely stable and therefore do not tend to form chemical bonds and have little tendency to gain or lose electrons.

The properties of the noble gases are:

Only krypton, xenon and radon are known to form stable compounds. The compounds of these noble gases are powerful oxidizing agents and have potential value as reagents in the synthesis of other chemical compounds. The noble gases show very low chemical reactivity due to only a few hundred noble gas compounds have been formed. The reactivity follows the order Ne ˂ He ˂ Ag ˂ Kr ˂ Xe ˂ Rn. Xenon compounds are the most numerous of the noble gas compounds that have been formed. Most of them have the xenon atom in the oxidation state of +2, +4, +6 and +8 bonded to highly electronegative atom such as fluorine or oxygen, as in xenon difluoride (XeF2), xenon tetrafuoride (XeF4), xenon hexafluoride (XeF6), xenon tetra oxide (XeO4), and sodium perxenate (Na4XeO6). Other gases are less reactive than xenon but we can notice the compounds such as krypton difluoride (KrF2), argonflurohydride (HArF).

There are many useful uses of noble gases. They are commonly used in lighting because of their lack in chemical reactivity. They are also used to provide inert atmosphere. Liquid helium is used for superconducting magnets. Liquid neon also finds use in cryiogenics because it has very high refrigerating capacity. Helium is used as a component of breathing gases to replace nitrogen and as a lifting gas in blimps and balloons due to its lightness and incombustibility. The noble gases are used in excimer lasers, microlithography, microfabrication, which are essential for integrated circuit manufacture, and for laser surgery, including laser angioplasty and eye surgery. Xenon is used as an anesthetic and argon as technical gas in welding technology.